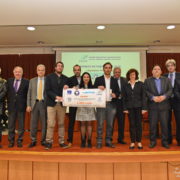 A team of NTUA graduates and students, consisting of Mr. Stathopoulos Spyros (graduate 2017), Mrs. Karakonstantinou Kalliopi (graduate 2018), Mr. Petroulakis Zacharias (student) and Mr. Vasilis Apostolopoulos (graduate 2018) that have drafted /are drafting their diploma thesis in the Department of Transportation Planning and Engineering, collaborated, claimed and received the 1st Prize in the Annual Panhellenic Competition of the Hellenic Chambers Transport Association (EESYM) “Dimitrios Tsamboulas” for the academic year 2017-2018.

Hellenic Chambers Transport Association wishing to commemorate the late Professor of NTUA. D. Tsamboulas, a close associate of EESYM and the Hellenic Chambers, for his extensive work and contribution to the Greek transport sector, has decided to establish the Annual Transport Award, “Dimitrios Tsamboulas”, among students and graduates of Greek Universities that have in their Schools or Departments Sectors or Concentrations/ Disciplines on Transport Studies.

For the academic year 2017-2018, the subject of the competition was the “Proposal for the Development of a Strategic Network of Island Connections with Regional Transport Hubs and coordination of Spokes (Hub and Spoke) combining transport modes”.

Department of Transportation Planning and Engineering

V. Kyriakopoulos student of the School of Civil Engineering awarded with “Apostolos...
Scroll to top